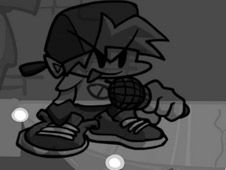 What is FNF: Boyfriend’s Dreadful Nightmare?

Who do you think is Boyfriend's biggest nightmare, the one thing that scares him the most? Well, of course, it is himself, which is the reason why you are now facing off against him in a rhythm battle in the game called FNF: Boyfriend’s Dreadful Nightmare, where he himself will fight a shadowy figure of himself, and you do it on three awesome new songs:

Of course, you should start off by choosing between the story mode and free play mode, picking the one you want to experience the most, and then give it your best to play all the notes of the songs at the right time, something you have to keep doing until the end of the songs to win.

How? Well, you press the arrow keys at the same time as arrow symbols above BF are matching one another, and then you win. Be careful not to miss doing that too many times in a row, because if it happens, you've got to start again from scratch. Enjoy!