Night of the Funky Bot

Night of the Funky Bot v2 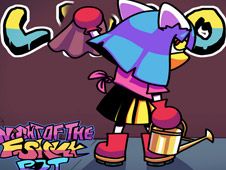 What is Night of the Funky Bot v2?

The Funky Bot is back, this time with two more weeks and way more songs for you to enjoy, since this is the V2 of the original FNF mods, which we are not at all surprised has appeared, considering that the character and its music became very popular very quickly, and, as you would expect, we wasted no time to bring this new version along for you!

Defeat the Funky Bot once more, this time with even more songs!

As we mentioned, this mod has three weeks, and they are:

Enter the Story Mode or pick any song you want from the Free Play mode, and give it your best to reach the end of the songs by playing all their notes along the way, following the charts appropriately. This is done using the arrow keys, keys that you have to press at the same time as the arrow symbols above BF match.

Be careful not to press the arrow keys wrong too many times in a row, because that happening means you will eventually lose the game. Enjoy!