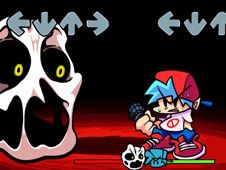 What is FNF vs DELIRIUM?

DELIRIUM is a scary antagonist that Boyfriend has encountered in his nightmares, which is why you've got to give your best to help our protagonist defeat him, because only by winning the rhythm battle against this scary creature will you be able to get back to reality. Your face-off is going to take place on the following custom songs:

Defeat Delirium to escape the nightmare!

For starters, you are going to choose between the story mode and the free play mode, with the goal being the same in either one, which is reaching the end of the songs and playing all their notes. To do that, press the arrow keys on your keyboard at the same time as arrow symbols above BF match one another, and keep going until the end of the song.

Of course, this means being careful not to press the keys too early, too late, or the wrong keys, since that counts as a miss, and if you have too many misses in a row, you lose the game. Enjoy!