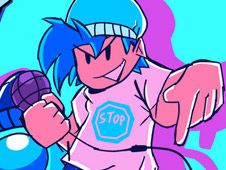 What is FNF vs BlueStopSign?

BlueStopSign is a guy who sort of resembles Boyfriend, with his blue hair and all, who you can see holding a stop sign, a blue one, as his name suggests, and he thinks he can replace BF in the world of FNF, which is why you have to beat him up in a rhythm battle and assert dominance, showing him that you won't stop, can't stop! The three custom songs of this full week mod are:

Start the rhythm battle and defeat the BlueStopSign!

After choosing between the story mode or free play mode, it does not matter, as you've still got to win, and you do it in the same way, which is reaching the end of the songs by playing all their notes according to the charts.

How? Well, when arrow symbols above BF match one another, you need to press the same arrow keys to hit those notes, and that leads you further into the song.

Of course, missing notes means losing the game, so be very careful not to miss too many of them in a row. Good luck, enjoy, and have fun as only here is possible!