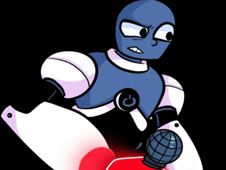 What is FNF vs Minus Eteled?

The FNF Elated mod featuring two interesting new antagonists has been received quite well when it first appear, so we've got no doubt at all that the very same thing is going to be true right now for the FNF Minus Elated mod, where you get to play with Minus Boyfriend against the minus version of these antagonists, something you do on the following awesome songs:

Use music to defeat the minus robots!

Whether you choose the story mode or free play mode, the way to win remains the same, and it is by reaching the end of the songs and playing all their notes according to the charts.

To do this, you press arrow keys at the same time as the identical arrow symbols above BF match one another. If you miss doing that multiple times in a row, you lose and are forced to start the game again from scratch. Enjoy!