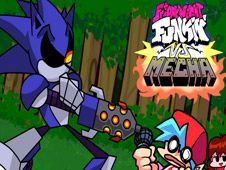 What is FNF vs Mecha Sonic?

Sonic has finally transformed into a robot version of himself, one known as FNF vs Mecha Sonic, and you will have to face off against it right now and here in this awesome new FNF mod, where only you and BF can defeat this powerful character, something we invite you all to do right now on the following custom tracks:

After choosing between the story mode and free play mode, either way, give it your best to reach the end of the songs by playing all their notes according to the charts, something that you do by pressing the arrow keys at the same time as the identical arrow keys match above BF.

Only once you've done that through the whole song and the progress bar is towards you will you have won, but know that if you miss hitting those notes too many times in a row, you have to start again from scratch. Good luck, and enjoy this game as only here is possible!