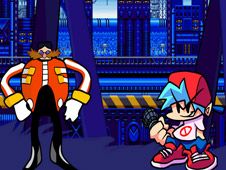 What is FNF vs Fandub Eggman?

Eggman from Sonic is now in FNF and has his fandub mod, meaning that fans are now singing his songs over him, so get ready for some interesting vocals as you try to defeat him on the following songs:

Use musical power to defeat the Eggman!

Hit the play button and then hit your notes as you go along through the song, all the way to the end of it if you want to win. This means that when arrow symbols match above BF's head, that is your queue to hit the same arrow keys, but know that if you miss doing it multiple times in a row, you lose and have to start again from scratch. Good luck, enjoy!