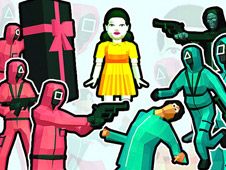 What is Squid Battle Simulator?

Squid Battle Simulator is a game that masterfully combines the green players and red guars from the Squid Game show on Netflix with a strategy game format as well as drawing elements all in one, resulting in one of the best new experiences we invite you to have today on our website, no to be missed out on for anything in the world, if you know what's good for you!

Simulate the ultimate Squid Game battle, and win it!

You will control the army of green players in each battle you take part in, having to draw your troops on the battlefield to arrange them however you think it's the best, and then start the fight, with the goal of eliminating the opposition army to become the winner. The last ones standing are the winners!

You can place various classes of soldiers on the field, but as they are more stronger, they are also more expensive:

After winning battles you earn funds, which you should use to power your campaign further, making your army stronger, and defeating even more enemies, and winning more battles. Good luck, we wish you tons of fun, and invite you to stick around for more fun to come, as only here is possible to have it!