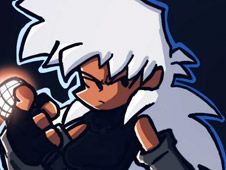 What is FNF vs Arizona?

Arizona is a girl who looks just like a fighter from Dragon Ball Z, but she is actually a musical warrior, one who is now challenging Boyfriend to a rhythm battle, so once again you are invited to help the protagonist win, something that you will do on the following list of songs:

Boyfriend Vs Arizona, the FNF battle for music!

Whether you will be playing in the story mode or free play mode, the way to win is done in the same way, by reaching the end of the songs, and that can only happen if you play all your notes according to the charts.

This means watching for when the floating arrow symbols match above BF, you press the identical arrow keys, but be careful not to miss pressing the keys multiple times in a row, or you've got to start again from scratch!