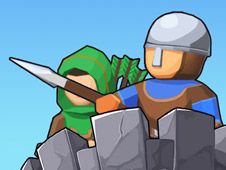 What is Epic Defense Clash?

Despite this new game being called Epic Defense Clash, it's not a TD game, but instead, it is a full-on action game in 3d where you become a hero who has to fight off dinosaurs, monsters, and other beings with magic and weapons, which looks amazing, is really easy to play and is going to be non-stop fun from start to finish!

To move with your hero you use the W, A, S, D keys, with J you attack, with H you use a special attack. Change between weapons, which can be melee or distance, such as arrows, using the L key.

On the planet you are on you will first have to defeat smaller creatures, and when you're done beating all of them, you have to move on and destroy the boss to advance the level and get your rewards.

With the rewards, you get you should use the shop to buy new weapons, better and cooler armor, or health packs and other cool bonuses, so you can get prepared for the battles to come, which will be even more difficult.

Get ready to start your new defense mission right now, have the most fun possible, and invite your friends to try out our awesome content as well, they won't regret it, for sure!