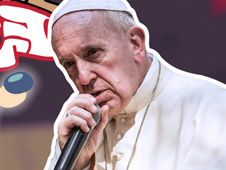 What is FNF vs Pope Francis?

Going up against Pope Francis in a rhythm battle from FNF is definitely something that can happen in this big and awesome series, and we now invite you to do just that by winning on the song called Pope-Rap!

There's one mode and one song, so reach the end of it by playing your notes according to the charts to win. This means that when you see arrow symbols float and match above BF's head, that is when you press the identical arrow keys.

If you miss hitting the notes too many times in a row, you lose and have to start again from scratch. Good luck and all the best we wish you all!