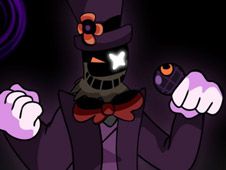 What is FNF vs Tio Sings Dude Man?

It's time for Boyfriend to sing with Tio, the antagonist from the Piggy Game, who you have to defeat right now and send him back to do evil deeds in his world, on the song called 'Dude Man'!

Watch for when arrow symbols match above BF's head and press the identical arrow keys at the same time to hit your notes, something you have to keep on doing until the song concludes to win. If you miss hitting notes too many times in a row, you lose and have to start again from scratch. Good luck, enjoy!