FNF vs Cash Dash (Vs. Dollar) 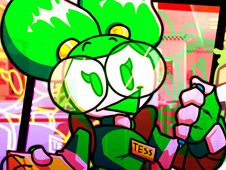 Tess needs to get money from BF at her restaurant, but instead, they decided on a rhythm battle, so let's help our protagonist leave the dinner with the power of music, winning on all the following tracks:

It's a Dine N Dash rhythm battle against Tess!

After making your choice between the story mode and free play mode, give your best to reach the end of the songs by hitting your notes according to the charts.

How do you do that? When you see arrow symbols match above BF's head, that is when you press the identical arrow keys. Be careful not to miss doing it too many times in a row, or you lose and have to start again from scratch. Enjoy!