Huggie and Kissy The Magic Temple 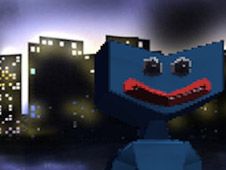 What is Huggy Defense Shoot?

Huggy Defense Shoot is a really awesome new shooting and skill game to have just been added into our category of Poppy Playtime Games, with a 3D render of Huggy in a new way, unlike you've ever seen before, and we're positive you will have plenty of fun going up against him!

Shoot and defend from Huggy!

You stand in the middle of a fenced garden, with Huggy Wuggies of huge stature sitting all around you, waiting to attack you. Use the mouse to attack them by swiping towards them, and use the finger if you're playing on a mobile device.

Shoot down the Huggy Wuggy all around you and get coins in return, but do not allow them to break the perimeter and attack you, because if you get killed by them, you have to start again from scratch. Move with A, D.

It's really that simple, so we invite you to give the game your best right now, after which we hope that this is far from the final new game from this category you try out, but keep on having fun with them instead!