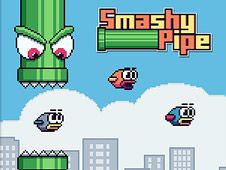 What is Smashy Pipe?

Smashy Pipe brings you a fresh and original take on Flappy Bird Games, which are known for their birds and their pipes, but now roles get inversed, so instead of becoming the bird, you take the role of the pipe, and the pipe is hungry for some bird meat, and you will help it feed!

Test your skills with the Smashy Pipe online!

Use the mouse to make the two pipes go higher when you click, and release the mouse button when you want them to descend, alternating between these two actions to catch birds between the two pipes, because when that happens, you will see the pipes smashing them and eating them up, which also means you score points.

Don't hit the birds head-on with any of the pipes, because if that happens you lose and have to start all over again from scratch, something we don't wish for any of you, as we hope you keep advancing and making a big score while having tons of fun!