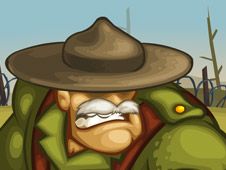 What is Battalion Commander 1917?

Battalion Commander 1917 is a war and shooting game with action that transports you back into World War 2 times, the year said in the title, probably the hardest and biggest year for the war, where the most battles took place, where you now become the head of an army tasked with winning for the forces of good. Are you up for the task?

Become the best Battalion Commander of 1917!

You start off with the rank of Second Lieutenant, but you can upgrade as you keep clearing levels and winning missions. In each mission, you are given various tasks such as covering a certain number of meters with your army, killing the required amount of enemy soldiers, or breaking through the defenses of the enemy.

Use the mouse to move your solder around, and position him in front of enemy soldiers to automatically shoot at them, while also being quite careful not to get shot down by them yourself, you might lose.

As you advance through the battlefield, collect soldiers wearing the same uniform, as they are part of your army and nation, and the more soldiers you have, the more damage you can do to your enemies.

Rarely can you play war games with shooting as dynamic and fun as this one, so make sure you give it a go right away, you will not regret it for a second!