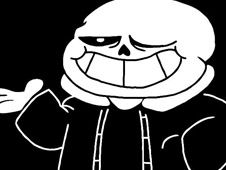 What is FNF VS Sasn (UnderPants)?

In our newest FNF mod, you become Fris and have to battle a funny version of Sans called Sasn, so it was not a typo, where you will have fun on the song named after the character!

When you see floating arrow symbols match above Fris, press the identical arrow keys at the same time to hit your notes, and keep doing it until the song ends to win, while also being careful not to miss hitting notes too many times in a row, you will lose and have to start again from scratch. Good luck, enjoy!