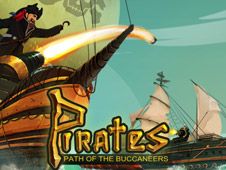 What is Pirates Path of the Buccaneer?

Pirates Path of the Buccaneer represents one of the best takes we've seen in a while when it comes to marine battle games and a game that was a must-have here considering that we know just how great pirate games, boat shooting games, and games in this genre usually are, so we would not have missed an opportunity to share the fun with you for anything in the world!

Take the Path of the Buccaneer and shoot the enemy Pirates!

With the mouse on PCs and the finger on mobile devices you will drag and shoot cannons from your pirate ship towards those in front of you in the sea, but also ships of the navy, sea monsters, or any other enemies that come before you in the game's various stages, having to shoot them enough to deplete their health bar and win.

If you aim for their cannons, they will be disabled for a few seconds, and they won't be able to shoot back. Take that chance to double down on firing upon them, and dispose of enemies quickly, because if they deplete your health bar instead first, you are going to lose.

As you keep winning battles, you will be able to get a bigger and stronger ship, equipped with better weapons, and no one on the seas will be able to stand against you. Dominate the waters and conquer them all!