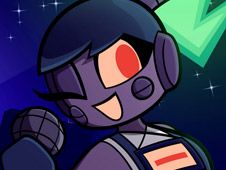 What is FNF vs Anne-Droid?

Anne-Droid is exactly the kind of character you are thinking about, a robot girl named Anne, whom you and Boyfriend encountered and now need to defeat using the power of music, going up against her on the following songs:

Defeat Anne-Droid in the world of FNF Games!

In either of the two modes you choose to play, winning is only achieved if you reach the end of the songs, something only achieved by playing notes according to the charts until then. To do it, press the arrow keys at the same time as the identical arrow symbols match above BF, on the right.

Pressing keys wrong, or at the wrong time, or even not pressing them at all means losing the health bar, and if it gets completely depleted, you lose and need to start again from scratch. Enjoy!