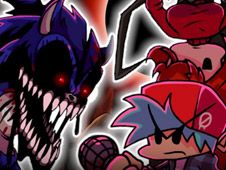 What is FNF EXEMerge vs Sonic.EXE?

FNF EXEMerge vs Sonic.EXE is a new mod featuring this iconic antagonist on some remixes with new sprites, graphics, and lots of awesome new things for you to enjoy, with the tracklist being the following one:

From the main menu you need to make your choice between playing in the story mode and free play mode, after which, in either case, give your best to reach the end of the songs by playing their notes according to the charts.

To do it, press the arrow keys simultaneously as the identical arrow symbols match above the character on the right. Don't miss your notes too many times in a row, because if your health bar depletes, you end up losing. Good luck, enjoy!