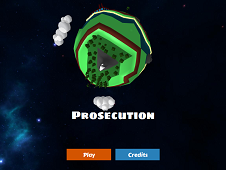 Prosecution is such a great ability dodging game, where you have the opportunity and the occasion to use the arrow keys or the D or Q keys in order to make sure that you will dodge all the following missiles which are coming after you and of course, the rest of the things and guns which will chase you without ceasing. First of all, you have to know that there are not known reasons why these guys want your plane to get destroyed so let's make sure that you will only focus on getting rid of them, making them loose your traces. You will be spining round and round around this planet, with hills and everything but from there, from that planet, there will be launched missiles after you, meant to destroy you once and for all. A single touch will be lethal for you and for your plane too so avoid this siutation, by controlling your plane like a pro, not giving a single chance to your armed followers even touch you or your plane. Good luck for the last time and run from prosecution as soon as possible! There will be chances for you to get closer by them, but anyway don't get fooled and avoid any kind of danger, like some huge flying balls full of spikes, with the same purpose as the missiles!