Clash of the Idiots

Craig of the Creek Legendary Trials 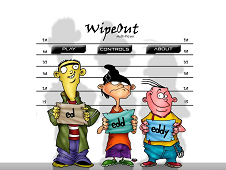 What is Wipeout with Ed Edd n Eddy?

Ed, Edd and Eddy are some real thugs and if you watched their TV animated series in your childhood, you know why. They always try to fool the other people in order to get exactly what they want but this time, you won't have to deal with this kind of situations, but trying this multiplayer task, with two, three or even four players. The purpose of this mission is simple but complicated to be accomplished, because you need to collect as many bubbles as you can, from the stoned blocks, coming in the game screen, one by one, one bigger than another. You can to sneak on them and fastly steal the bubbles before the other player does it so every player sits, at the beginning of the game, on a surf board. If you fall down from there or slip, you instantly lose, so avoid this. Good luck and the more bubbles you collect the higher is the score. The score of every single player is written in the top side of the game screen. Watch out to never get stuck on the stone blocks once you've went there to collect the bubbles so also try to hit your opponents because this way you'll be the first one who reaches the bubbles and also your score will increase and his will decrease with each hit!