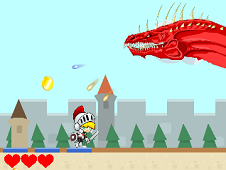 What is Dragon Chaser?

Dragon Chaser is such a great and so cool ability and insight game, which offers to you the occasion to use the mouse in order to successfully deal with this special chasing mission, where you have to put down the big, red and so dangerous dragon, from as few attempts as it is possible. This game isn't too complicated but it is so interesting and cool so let's try to find out what to do and watch out because you could easily become an addict after firstly trying it. Click on your hero, who is a knight who is chasing the dragon, to make it move and run after the huge monster. There are some bullets, yellow and blue, appearing on the game screen. The yellow ones hurt the dragon and the blue ones, hurt your knight so dodge the blue ones it doesn't matter what! Also, move to collect the falling coins, which are so important for the final score, after calculating everything. Go for it right now and pay close attention to every single detail and make sure that you won't risk anything so in the bottom side of the game screen, there are also written the lives you've got so when you run out of them, you are done!