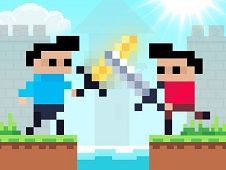 What is Castel Wars?

In this new 2 player game, you will have to fight to win. There are 2 modes, PVP and zombie, in the PVP mode you fight against the other player, you spawn in with wooden swords at first which don't deal a lot of damage. After some time you will get an airdrop on the field that you can collect, the airdrop can give you multiple upgrades like health, the gold sword that deals 20 damage, and the diamond sword that deals 30 damage, a bow and arrow drop, and more. On both sides you have a catapult that you can shoot to defeat your opponent, it also destroys the enemy tower on the other side, and hitting your opponent with it will defeat him instantly. Killing your opponent will give you 1 point, whoever has the most points at the end wins.

In the zombie mode, you will instead defeat zombies together and the player who gets to 30 points wins. Killing the zombies will give you 1 point so one of you must defeat 30 zombies to win. The zombies will throw poisonous rocks to hurt you and to destroy your tower so you must avoid them in order to avoid damage. Same as in the PVP game mode, you also have airdrops that upgrade your gear, give you health or give you an advantage in other ways. When you die you will respawn after a few seconds. Each of you also gets a catapult that can instantly kill zombies.

There are multiple levels for each game mode, each with its unique design. You can also choose between easy, normal, and hard difficulties in the zombie mode, increasing the difficulty will increase the damage dealt by zombies and also the amounts of rocks thrown at a faster interval. When using the catapult you will be shown a slider with different colors on it, you must time the shot correctly in order not to shoot the ball too high or too low.