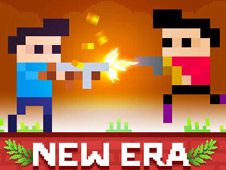 What is Castel Wars New Era?

When it comes to war games in two players that you can play online, the Castel Wars Games series seems to be quite popular at the moment, which is the reason why we are excited to share with you all right now a new and awesome game in it, the third game of the series, one known as Castel Wars New Era!

Take part in battles between castles, now in the new era!

Each of the two players is going to control a castle, and the goal you have is to use the weapons at your disposal to shoot down the enemy's castle, and bring them down first before they can bring yours down, with the player that wins and knocks down the other one first becoming the winner.

The Mayhem mode is similar, but it has no castles, just the two players trying to defeat the other one first, but in the Zombie mode, you have to team up with the second player and protect your castle from the zombies that are going to attack it.

Now that you've understood how to enjoy this game, we are sure you will give it your best right now, and have fun a ton, both of you!