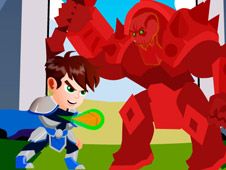 What is Hero Tower Wars Online?

Hero Tower Wars Online is a brand new spin-off made by fans of the classic Hero Wars Game that has overtaken the internet and is almost everywhere, with many other creations have appeared since its release, but trust us when we say you will never probably see a better edition than this one, something we're about to prove to you right now!

Can you be the Hero and win the Tower Wars?

You will have a total of 25 levels to complete, getting coins after each successful campaign, which you should definitely use in the shop to buy better armor for your hero so that you can clear the higher levels with less difficulty. Depending on your performance you can get one to three stars for each stage.

You start off in your tower, and then there will be towers of goblins. Your hero has a number on him, so drag him to a goblin with a smaller number to defeat them, gain that number for your power, and then defeat the other goblins until there are no more. So, yes, you have to do maths to win the battles.

In addition to goblins, there are also chests that multiply your numbers, instead of adding to them, and you can have bosses to battle as well, such as dragons. All the best we wish you, victory from one stage to another, and we hope you continue to have fun on our website today!