The Legend of El Dorado

Legend of Zelda: Ocarina of Time 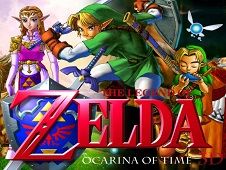 What is Legend of Zelda: Ocarina of Time?

Legend of Zelda: Ocarina of Time is a very popular game that we are happy to bring you to our website with emulation! This game is an adventure game with puzzle elements in which you play as Link, whose mission is to prevent a thief called Ganondorf to obtain the Triforce.

Link has multiple abilities, he can wield swords that he finds, he can also use archery weapons that he'll eventually find on his journey. You will encounter many different enemies you need to defeat, including bosses as well.

Bosses are very powerful enemies you will encounter in certain locations only, you must defeat them to progress further in the game.

Once the final boss is defeated Link is returned to his own time with the Ocarina of Time and tells Zelda Ganon's plans so they never come to fruition.

We hope you'll have fun playing this classic game!