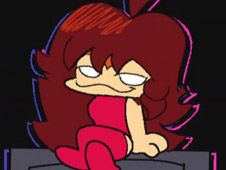 What is FNF Shitpost Mod?

It's always a good idea to check out any of the new Friday Night Funkin mods online brought over by our team since we are always making sure to bring you only the best of them, or, in this case, the worst of them, although that is a good thing, this time. Yes, the game you get to play right now is called FNF Shitpost Mod, and the reason it is named like that is that the characters have been re-drawn to look quite bad, but that is intentional, and it makes the game very funny and fun!

Other than the re-drawn characters, sprites, and icons, the game remains the same, so help BF defeat the various antagonists, including Daddy Dearest, Mummy Must Murder, Spooky Kids, Pico, Monster, or Senpai, and you can do it in either the Story Mode or the Free Play mode, it's up to you.

To win the battles you need to reach the end of the songs and turn the progress bar in your favor, which you do by hitting the notes of the songs at the right time. Press the arrow keys at the same time as the arrow symbols above BF are matching, but don't miss too many notes in a row, or you lose the game. Good luck!