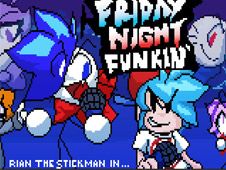 What is Friday Night Funkin’ X Rian The Stickman?

Ryan is the stickman protagonist of his world, who starts to uncover its hidden secrets by doing musical battles against various shady characters, something that you are here to help him win in our new and fantastic FNF mod called Friday Night Funkin’ X Rian The Stickman, where you help out this new protagonist on these following songs:

Save stick city with the power of your microphone!

As per usual, you can play in either the story mode or the free play mode of the game, it's up to you, but know your goal remains the same, which is playing all the notes of the songs to the end of them, and then you win.

You do this by pressing the arrow keys at the same time as the arrow symbols above BF match above one another, and you have to keep doing it until the end of the song.

Be careful not to miss too many of the notes one after another, because if that happens, you lose and have to start again. Good luck, and enjoy this game as only here is possible!