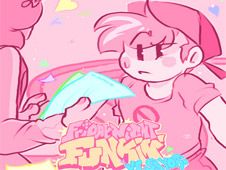 What is Friday Night Funkin Vs Sayori?

Sayori from Doki Doki Literature Club (DDLC), has somewhat gone crazy, as she is not her usual joyful self, which is why you and Boyfriend are to come to her rescue since the only way to bring her back to her senses would be to win a music battle against her, something you will do in this brand new mod we've prepared for you all, a mod that features the following songs:

Win against Sayori and bring her back!

You can play this game in either the story mode or the free play mode, it's up to you, and in each of them, you will have to press arrow keys at the same time as arrow symbols above Boyfriend's head match one another.

You have to keep doing so until the end of the songs to win, which means that you should be careful not to press the keys at the wrong times too many times in a row, or you lose.

Good luck to you all, and we definitely hope to see more of you on our website, since we're never out of fresh new games with FNF!