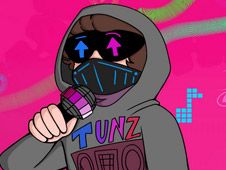 What is FNF vs Muse Tunz?

Muns Tunz is a cyberpunk-looking character from the future who has come to battle Boyfriend through music, so here you are, invited to play this brand new mod and give it your best to defeat the character in a rap battle, something that you are going to do on the following custom songs:

Use the power of music to defeat the futuristic Muse Tunz!

Whether you pick the story mode or the free play mode, you will have the same goal, which is reaching the end of the song and playing all of its notes, something that you do use the arrow keys, keys that you have to press at the same time as the arrow symbols above BF's head are matching with one another.

If you miss pressing the keys too many times in a row, you are going to lose, so we give you the best and hope that does not happen, but instead, you win and have tons of fun!