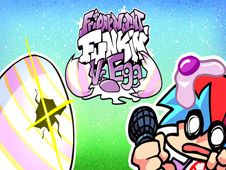 What is FNF Vs. Giant Egg?

A Giant Egg has ruined the park date that Boyfriend and Girlfriend were on, which is why right now Boyfriend has entered a musical battle with this creature, with you being invited to play this new and awesome mod and do your best to defeat it together, something that you will be doing on the following custom songs:

Boyfriend Vs Giant Egg, the hottest rap battle of the day!

After you tap on the egg to crack it, choose between the story mode and free play mode, and then give it your best to reach the end of the songs and play all their notes according to the charts since that is how you win.

When you see arrow symbols above BF's head match one another, make sure to press the same arrow keys yourself, and keep doing it until the end of the song to win.

Be careful not to miss pressing the keys too many times in a row, or you will lose and have to start again from scratch. Good luck, and enjoy this game as only here is possible!