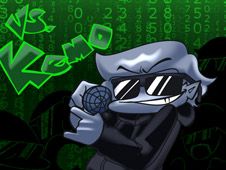 What is FNF VS. Kemo?

After somehow ending up in the Matrix, Boyfriend wants to get out of it, but it seems that the only way that he will be able to achieve that is if he defeats Kemo in a rhythm battle, something you have to help him out right now by playing this game and defeating this new antagonist on the following songs:

Win the rap battle and exit the Matrix!

As it is the case with all these reaction time games from this category, look for when arrow symbols match right above BF's head, and, when they do, press the same arrow keys on the keyboard, something you've got to keep doing until the song ends to become the winner.

You become the loser if you miss pressing the keys too many times in a row, so be focused so you don't allow that to happen. Good luck, enjoy, and stick around for more fun to come!