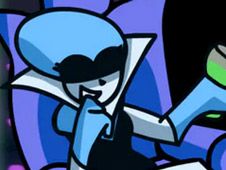 What is FNF vs Potassium Queen?

It seems that the Potassium Queen from Deltarune is back, but now, instead of borrowing a song from another mod, you will face off against her in a rhythm battle on her own original song, one that is known as Palace Raid, where we are sure you will help Boyfriend defeat this character, just like you have done before!

Help Boyfriend win against the Queen of Deltarune!

To win a rhythm battle in this kind of game you need to reach the end of the song by playing all of its notes according to the charts, and this is done by pressing arrow keys at the same time as arrow symbols above BF match one another, and once the song concludes, you become the winner.

Instead, if you miss pressing the keys multiple times in a row, that will lead to your loss, so be careful not to let it happen for anything in the world. Enjoy!