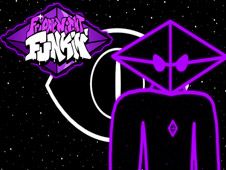 What is Friday Night Funkin vs Shard?

Shard is one of the most powerful entities in the whole world of FNF, but Boyfriend did not know about that when he challenged him to a musical battle, so now our protagonist needs all the help he can get to defeat him, something we invite you all to do right now with this awesome mod and its awesome songs:

From the game's main menu you will choose between playing the game in the story mode or free play mode, and then you have to give your best to reach the end of all the songs by playing all their notes in order to win.

To do so, when you see arrow symbols match right above BF's head, press the same arrow keys at the same time, and keep at it until the song concludes to win it.

If you have missed pressing the keys too many times in a row, you lose and have to start again, so be careful not to let it happen. Enjoy!