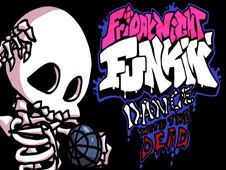 What is FNF vs Sophia (Dance With The Dead)?

Right at this moment, we are delighted to share with you a perfect new Friday Night Funkin' mod for the month of October, when Halloween takes place, as right now you are invited to have plenty of fun with a tremendous game such as FNF vs Sophia (Dance With The Dead), where you have to defeat this skeleton who raised from the dead on the following songs:

Defeat the skeleton through music and send it back to the grave!

This game is playable in both the story mode and the free play mode, and the goal you have is the same in both, which is playing all the notes of the songs at the right time in the chart, and once you reach the end, you become the winner!

To play notes, watch for when arrow symbols above BF match one another and press the same arrow keys on the keyboard yourself. Don't miss pressing the keys too many times, or you lose.