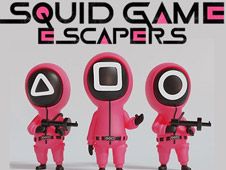 What is Squid Game Escapers?

If you were to take part in the Squid Game but change your mind during the game because of its horrors, it would only be natural to search for other people like that and attempt an escape, which is precisely what you get to do right now and here with the awesome new game known as Squid Game Escapers, a cool new stealth game featuring green tracksuit contestants as protagonists!

At each level of the way, you have to figure out a path for the people to take, getting past various traps and obstacles, of which we really need to mention the electric fences, and you also need to build your route in such a way that you are not getting caught by the cameras watching you, which turn on when the red light appears.

Use the mouse to set the path you and the people take, and click to make them start running. Find the road to safety to clear the level and survive, but don't get busted, or the level is lost and you have to start it again from scratch, which you can't want happening, right?

Good luck, and make sure to check out the category further to keep having fun in the universe of your new favorite show!