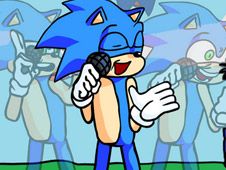 What is FNF: No Villains Sang by all Sonic’s?

One Sonic in an FNF mod is cool, but multiple of them is even better, which is why we now invite you to sing with multiple Sonics a song called 'No Villains', and it rings true because there will be only friends here!

Let's allow No Villains with the Sonics and FNF Games!

When you see arrow symbols float and then match above your character's head, at the exact same moment you need to press the identical arrow keys. Keep at it until the conclusion of the song to win, but know that if you miss hitting said notes many times in a row, you lose and have to start again from scratch. Good luck, enjoy!