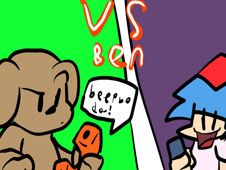 What is FNF vs Talking Ben the Dog?

Ben, the Talking Dog in the world of Talking Friends is also a singer, mind you, and he wants to showcase his abilities against the one and only Boyfriend of FNF, but, as per usual, we are going to help out the blue-haired boy win, no? Let's do it, shall we?!

Let's show Talking Ben who's the big dog of music in FNF!

The song you are trying to win on is called 'Talkin', and to win you need to reach its end by playing all of your notes according to the charts. This means pressing arrow keys at the same time as the identical arrow symbols match above BF. Don't miss hitting them multiple times in a row, or you have to start again from scratch. Good luck and all the best we wish you all!