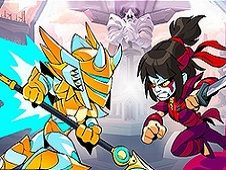 What is Brawlhalla Grand Slam?

Brawlhalla Grand Slam is now available directly from the browsers of your PCs or mobile devices free of charge and unblocked only on our website, where we would never miss the chance to bring forward for you all some of the best multiplayer fighting games online, especially with such graphics, soundtracks, character, and easy mechanics to follow and implement.

Can you survive the Brawlhalla Grand Slam?

The game has this title because you will be thrown in an arena where each player and their avatar will slam into one another in order to attack, something for which you use the mouse, holding it and aiming where you want to jump towards, and then releasing to make that shot.

Now, depending on the weapons you hold and the powers you have, hitting enemies damages them, so keep doing that until you are the last one standing. Of course, players will attack you in the same way, so don't be the one slammed around and defeated. As you jump, you can grab weapons, defenses, power-ups, and the like, using them to your advantage.

After each fight, use the coins you earn to buy new skins, weapons or upgrade your character. Let the ultimate slam battle begin, and make sure to stick around for more of our daily games, they are simply the best, you will see!