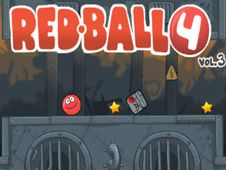 We return to our Red Ball adventures with the game called Red Ball 4: Volume 3, as the fourth game in this classic series, is so big that it had to be divided into multiple parts/volumes, and right now you are going to have a ton of fun with a bunch of new and awesome platformed levels!

Obviously, the red ball is your character, and you use the arrow keys to move and jump with it, having to reach the end of each level to clear it, so aim for that finish line flag.

As we said, squares are enemies, so avoid them, or kill them by jumping over their heads, but also be careful of other traps, such as laser beams, or not to fall into pits or dangers.

Before you reach the end of each level, try collecting as many of the stars as possible, improving your score, and be on the lookout for any other power-ups you might find.

You only have three lives, so losing all of them means losing the game, so we recommend focusing and not letting that happen for anything in the world, no matter how difficult further levels become.

Good luck through your new adventures with the Red Ball, and check out the other games in the series if this was one of your first, you're in for a treat, of course!