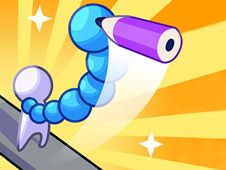 What is Draw Fighter 3D?

Draw Fighter 3D is here to take the genre of fighting games online 3D and twist it on its head, giving you an experience unlike you've had before since drawing games are not usually combined with this genre, but today it is, and you're about to have a fresh experience unlike any other times, guaranteed!

Let's draw and fight in 3D!

Use the mouse to draw your fighter around his torso, creating its arms and legs out of bubbles, and then fight each opponent that you encounter. You can see their own shapes, so try creating your fighter so that it can go up against it, and you get the upper hand, or leg, for that matter.

Then, use the mouse or tap with your finger on the forward, backward, and attack buttons, alternating these moves to hit your opponent, and when you have depleted their health bar totally, you will have won, simple as that.

As you get more coins from the fights you win, use them to buy upgrades for your fighters, making them stronger and better, since the same will be true for opponents down the road, which only become more difficult to deal with. Let's start!