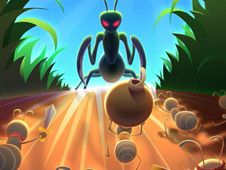 What is Ant Army Draw Defense?

Ant Army Draw Defense is a game that combines tower defense games with strategy games, and war games, and adds the surprise element of bugs, as we go down to the world of these small creatures hiding in bushes, nooks, and crannies, and the sort, with the ants being among the smallest insects around, so when they have to face a bigger opponent, their best solution is their numbers and teaming up together!

Draw the perfect defense for your ant army!

In each level the ants face off against a bigger bug or insect, sometimes multiple of them at one time, especially in levels further down the road. The goal you have is to help them defeat these enemies by drawing armies of ants and attacking the foes, defeating them properly.

Use the mouse to draw lines, which is where ants appear, but, of course, you have a limited amount of them you can place on the battlefield each war, but as you advance and win, you will be able to strengthen your army and make it bigger too. Use the rewards you earn to do so.

Go to the Anthill to upgrade it, or to the Shop to buy all sorts of goodies. In the Anthill you will also unlock other kinds of ants, wielding various weapons or having various powers, because having a diverse army with various positions will unlock the key towards victory in each war, no matter how big your rivals are. Start now, and see how much fun there is to be had here!