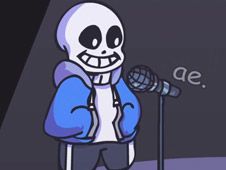 What is FNF Bonehead vs Sans?

In the new FNF Bonehead mod, you once again go up against the one and only Sans from Undertale, which we invite you to do with a lot of excitement right now, knowing that you will surely have a great time with the song called just like the title, as we've had tons of fun with it too!

When you see arrow symbols match above BF's head, press the identical arrow keys to hit your notes, and keep on doing it until the song's conclusion to win, since you need to be hitting your notes. If you make too many mistakes and miss too many notes in a row, you lose, so focus not to let it happen but win instead!