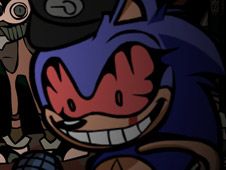 What is FNF Perdition V2 (Retaliation)?

Satanos Sonic returns in the FNF mods universe for the Perdition V2 mod, where he and Boyfriend will fight against one another on the new track called Retaliation, which we are sure you will really appreciate and have fun with from beginning to end!

You win once you've reached the end of the song, so when you see floating arrow symbols match above BF's head, that is when you need to press the identical arrow keys to hit your notes. Missing to do it too many times in a row depletes your health bar and allows your opponent to win, so focus not to let it happen but be victorious instead!