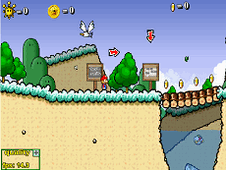 Super Mario 63 is a game that proves that big fans of any media can make their own content inspired by their favorite proprieties because they love those things that much that they pour their souls into creating their dreams, all of these things being clear from the get-go as soon as you start playing SM63 on our website, where we could not have missed the chance to offer fans what they want!

Let's dive into the amazing world of Super Mario 63 and have countless adventures!

While going to the castle for the celebrations, which will be the tutorial level of this game where you learn the simple mechanics you will use through it, Bowser got there first, and, as he usually does, he kidnapped Princess Peach, and when he messes with the Shine Sprite Orb, which, after being destroyed, causes the Mushroom Kingdom to descend into chaos and darkness.

Now, only Mario, guided by you, can and has to go to new destinations where he is to recover new shine sprite orbs, collect them all to return magic and light into the kingdom, and after a final encounter with Bowser, defeat the fiery Kappa and rescue his beloved princess!

How do we play Super Mario 63 on browsers?

To move and jump you will use the arrow keys, of course, and if you want to read a sign on the road, press the Z key when you are next to it. This key is also used when you get next to another character and you want to talk to them, which is recommended because they have the wisdom to impart to you, especially the toads.

Drop on the heads of Kappa frogs to kill them, because if they touch you head-on too many times, they deplete your health bar, you lose and have to start again from scratch. Other enemies are the Bob-Bombs, and you can defeat them by using spin attacks on them, so dash towards them and press the X key to activate it.

If you need to use FLUDDS, they can be found in the blue boxes, and you grab them by jumping over them and then pressing the C key while you are doing your drop, but be careful not to run out of water, because then these useful power-ups are not usable anymore. They help you fly where you can't make jumps, and they can be reloaded by simply dropping into water and getting more of it, their fuel.

Along the way, as you try completing one level after another, be on the lookout for magic mushrooms that you can pick up and use other kinds of power-ups, such as getting bigger or getting more lives, and try collecting many coins for a big score. Only you can save the kingdom and its princess, and have the retro-adventure of the day, only on our website, free of charge, of course!