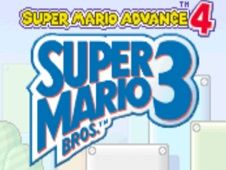 What is Super Mario Advance 4?

The first version is the classic Super Mario game, it is the very first one coming out before Super Mario Bros 1. In this game, you need to advance through the phases by defeating the spiked Koopa Troopas and fireballs. The koopas will go from the first pipe to the last ones, you can jump to move the platform above of you to destroy the fireballs and turn the koopas over. There is also a POW block that will startle everything on the stage.

It's time to talk about the other game, Super Mario Bros 3! In this Super Mario game, Bowser comes up with a new plan to capture the princess and terrorize the kingdom! Using his ship he releases a Koopaling to each castle. The koopalings are much bigger variants of the Koopa Troopa that you must defeat in each castle. While Mario was defeating the Koopalings, Princess Peach was captured by Bowser and you also need to free her from Bowser.

This Super Mario game is different than the other ones, it features a map that Mario must travel through. There are 8 worlds in total as in the previous games. After finishing a level you will also get an item that you can use while in the game. Mario can also open question blocks that give him the items and can also break brick blocks to collect coins. Coins can also be found on each level and can also be collected by opening the question blocks.
Items: There are countless enemies in the game that you need to overcome or defeat, the most common are: There are countless more enemies in the game that you will find. Some enemies are also only available on certain maps like the Angry Sun that tries to defeat Mario by swooping down on him from the sky. At the castles, Mario will encounter the Koopaling bosses. These bosses need to be stomped on 3 times to be defeated and are required to pass onto the next world. In the fortresses, you will find "Boom Boom" a miniboss that is very simple. Super Mario Bros 3 also features a 2 player mode. In this mode, Mario and his brother, Luigi, take turns playing the levels. When one brother fails or finishes a level, the other brother will take over until the same conditions are met. This version of the game also uses the upgraded graphics.

Time to defeat Bowser and free Princess Peach once again!