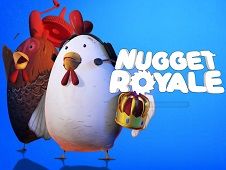 What is Nugget Royale IO?

Our latest adventure for you guys is the Nugget Royale IO game for boys and girls, in which we are sure that you will have a great time, because you will see that this is going to be a new 3D challenge, in which you will have to help a little chick to grow bigger and bigger.

It all sounds so fun and so easy, but you dear kids can see that in this new IO game, there's going to be many opponents and many difficulties that you will have to face in order for your little baby chick to grow bigger than anybody else. This new 3D IO multiplayer game will have to be played using the A, S, W, D and SPACE keys on the keyboard, and they will help you control the baby chick and the SPACE key will make it jump when you are in danger.

The only way that you can make your chicken to grow bigger is to feed it, and you will see that in each level, there will be food on the grownd, and all you have to do is to hover over the food and your 3D chick will eat it and grow bigger with each bite.

At the same time, the other 80 players will try to do the same thing and outgrow you, so that they can push you off the level, and so they will have a better chance to win the game. You can see that your other 79 opponents inside the IO challenge will not be your only consern, because the game will come at you with different obstacles, like big butcher knifes falling from the sky on the board that you move around to eat the chick food.

Try to win the game by move around constantly, and see how by the end of the challenge, you will have a great time and be the last chick standing, and have a big baby chicken, and you will see how many other 3D animal games and multiplayer IO games for kids will continue to appear right here on our website. Have fun!