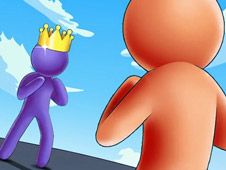 What is Giant Rush Online?

One of the coolest new action games online to have been added on our website right now, a cool new 3d game called Giant Rush Online is the game to play right now, since it combines rushing games with battle games and collection games all-in-one, resulting in a fresh and interesting experience you will love from start to finish, otherwise, we would not have shared the game with you in the first place!

Become a giant amongst giants!

Each level is comprised of two parts, starting with the rush one, where you begin as a blank white stickman whose moves you control using the mouse, moving left and right as he marches forward. On the track, you have to collect fruit to get bigger and become a giant, but only collect the fruits of your color.

There will be checkpoints through which you enter where your color is changed, so avoid all the fruit that is not your color. You could have bananas for yellow, strawberries for red, grapes for purple, and others. Avoid spikes or other traps that might appear in your path in further levels.

Now, after clearing the run, you reach boss giant that you have to defeat, which you will attack by pressing on the button on the bottom middle of the screen, where you have to keep on tapping until you deplete the boss's health bar completely, and have won the battle.

Also, with your final punch, you send them flying, and the higher you send him, the more extra points you get. You can also get points by collecting coins along with the courses and use them to buy new skins for your giants.

Good luck to everyone, and if you have friends who you think would also love the game, make sure to share it with them!