Among Us Crazy Shooter

Among Us Bubble Shooter 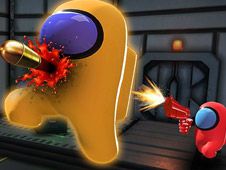 What is Among Shooter Online?

Our category of Among Us Games online grows bigger and becomes better with each new addition we have for it, and the newest shooting game online to have been added in it is surely going to prove that, as we're tremendously happy to have added Among Shooter Online, a high-quality game that is also one of the best multiplayer shooting games to have been added into the category.

In the main menu of the game you have the option of choosing your name, and you get to customize your character, which means you can put different hats on it, at first, but as you proceed and win matches you will be able to add weapons and other upgrades to the character. You can choose the Find Match option to be paired with random players worldwide, or create your own match with friends.

After being thrown in the arena, four imposters, with one of them being yourself, will try to shoot up each other, with the goal being to shoot down all the other crewmates while being the last one to survive. Move and jump using the W, A, S, D keys, shoot with the left mouse button, throw grenades with the wheel, and use the right mouse button for a melee attack.

Different weapons and upgrades can appear on the map, and you should take them and use them against the other players. Good luck, and we hope to see you around some more since it would be a shame for you not to play even more great games as only here can be played!